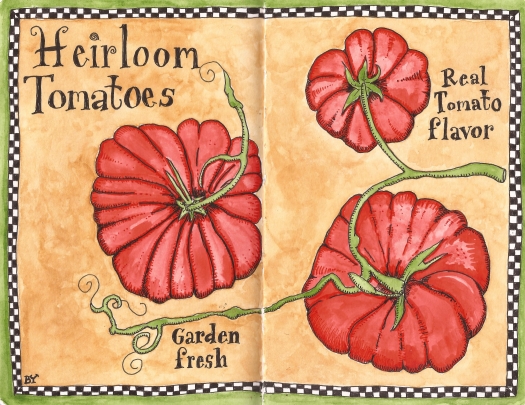 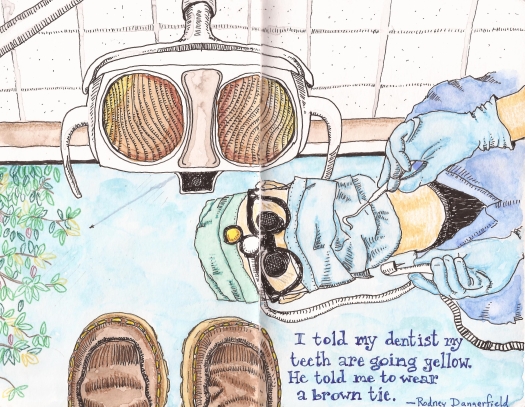 Last week I spent 2 1/2 hours in the dentist’s chair.  What I learned was shocking.  There’s the mother Grizzly Bear, the Great White Shark, and Katy, my dental hygenist.  All three are vicious and blood thirsty.  One of these I have to face again in 6 months…I’m weighing my chances with the bear.

This is a cool, big old looking mirror at a Moxie Java coffee shop.  I really liked the old mirror against the brick wall and the reflection in it of the front door.  This was a “quick sketch” just to keep in practice working at a quick pace.

I have absolutely no idea why I sketched this or what I was thinking. It looks like a place I’d like to go though! 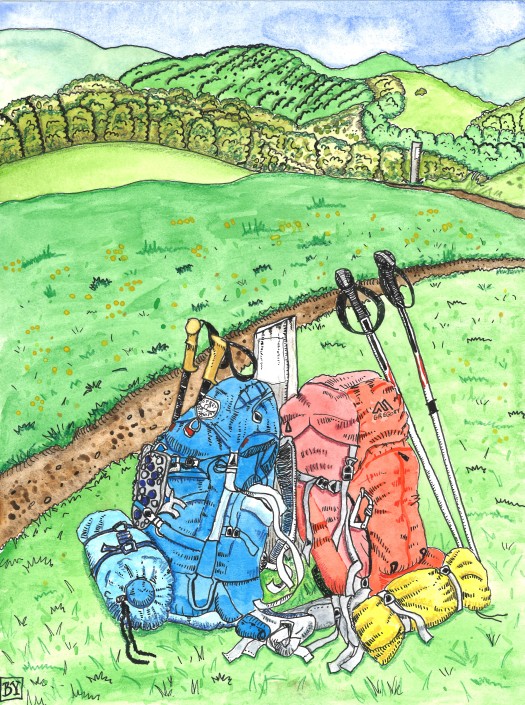 A couple of friends of mine went on a hike along the Appalachian Trail, took a pic. of their packs at Max Patch, NC.  They hiked from there 22 miles and 2 days later, to Hot Springs, NC. Then requested a sketch of their pic.  While I get a lot of pleasure in sketching, I find it nearly embarrassing to try to capture the beauty of nature. Who can do that?? 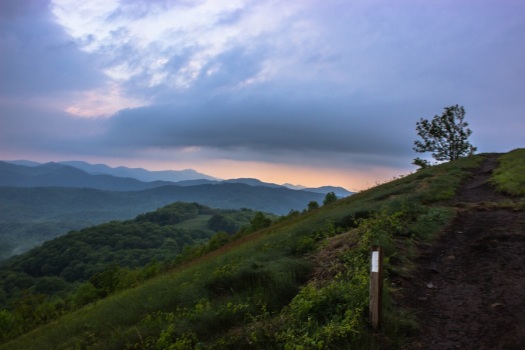 On a recent day trip to McCall, while driving, the river right there a few yards from the highway, I took a mental snapshot and drew this from that picture in my head.  Yes, I imagine in cartoony-sketches, which is fun. 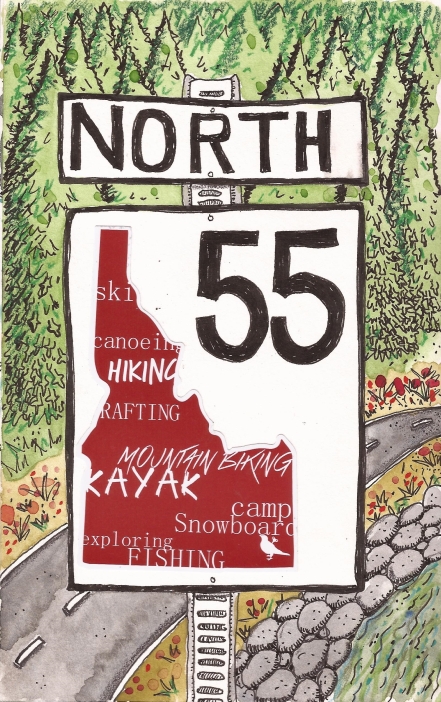 Highway 55 North from Boise to McCall.  Probably my all-time favorite drives and I’ve driven this a few hundred times over the years and it never gets old.  Winding along the Payette River thru the mountains, raging whitewater next to the highway, snow capped mountains, wildlife, ascending to over 5,280 feet by the time you get to McCall, complete with crisp, cool clean air and the overwhelming scent of pine trees. 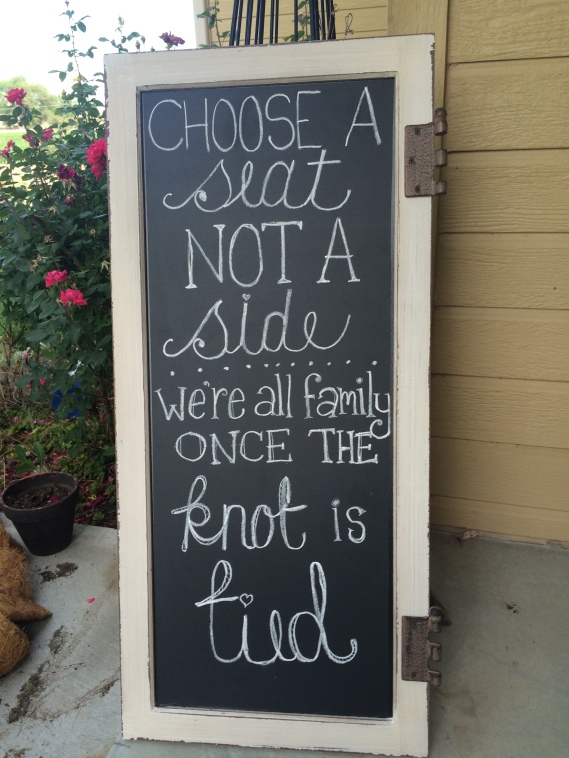 My daughter is in a wedding today, and part of her bridesmaid duties was to come up with some chalkboard signs.  She’s pretty creative and artistic on her own but pressed on time, she showed me a picture on Pinterest she wanted.  Needing it today, I basically copied the same sign someone else did, took their idea, stole their little rhyme.  (which was probably stolen from someone else…) 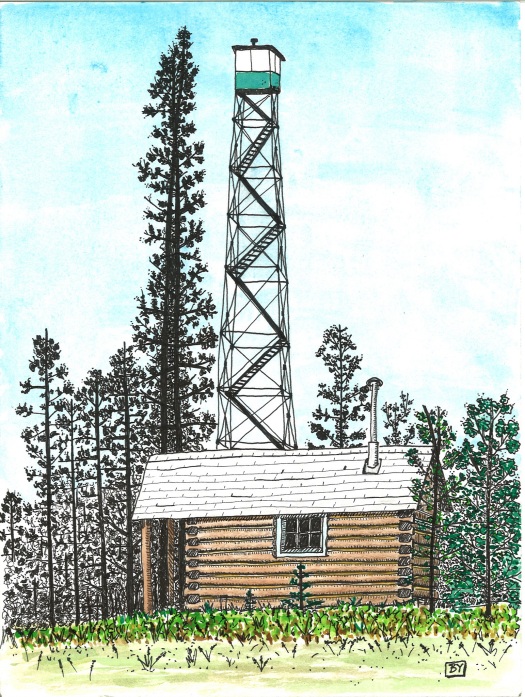 I did this picture for a good friend of mine who inspired me with the amazing story that goes with it.  As you know I don’t usually write much so thank you for taking the time to read.

One of my best friend’s dad built the Cold Mountain lookout tower cabin in the Idaho wilderness, northeast of McCall, Idaho. As a young man, he built it in 1932, by hand, with the tools he had, obviously no electricity and every 30 minutes he would climb up in the tower and look for forest fires. He lived there during the “fire” season from late spring to fall.  The greatest adventure for a single young man in the remote wilderness mountains and streams of Idaho living among the deer, elk and bear in the unadulterated beauty of the land in the 1930’s…*(insert “Lonesome Dove” theme music here…)

Later, when my friend’s parents married and were trying to start a family in the early 1940’s they weren’t able to have children without a costly operation for his mother.  In order to get enough money for the operation,  he decided to go overseas and work for a construction company for 9 mos. building an air strip on Wake Island, in which he would earn enough money for the operation. *(people worked and paid for things in advance back in the olden days, today we’re smarter and more advanced and go into debt…)  After 7 1/2 mos. there, with only a month and a half left till completion,  Japan attacked Pearl Harbor and then headed to Wake Island, and took control of the island and the air strip. He was captured as a  prisoner and taken to Japan where he spent the entire World War in a P.O.W. camp.  All his wife knew, was that Wake Island had been taken over by  Japan and hadn’t heard from her husband.  (There was no texting, or face time or Facebook, ironically, people used to know how to have conversation face to face and see and feel emotion instead of emojis, and they used to listen to one another and develop true deep and meaningful relationships.)

She waited all those months and YEARS for him. Nobody knew anything about the men, where they were, if they were alive, on the other side of the world. No communication. These were not trained soldiers, but construction workers. Eventually, she received a letter from him and that he didn’t know where he was being held, but she at least knew he was still alive.  His dad said he knew when the war was nearing its end because he recognized U.S. planes flying overhead and heard bombing nearby.  A few months after the war, American troops discovered the camp.  So many men didn’t make it and died in the camp, some came home mentally ill and some turned to alcohol. Some of the men’s wives had remarried believing their husbands would never return.  My friend’s dad was very meek and patient and helped so many to survive the experience by keeping his mind focused on helping the other men and on his wife back home.  Finally, after about five years he returned home to his wife.  And they did receive the money to get the operation and it was obviously successful!   My friend was born the youngest in the family, the only son.  By the time he was born, his parents were a lot older and it was in some ways like being raised by grandparents, so, double blessing!

As my friend was sharing this story of his parents, I felt like I was watching a movie. I could see it all happening in my mind and being inspired by  this kind of love and devotion. And at the same time, feeling so grieved at how far, far away our nation is from the foundations of  love and commitment to one another and the value of  children and human life in general.  The value of family and the value in a person’s word. Used to be, that was everything.  Yes there are too many injustices in the world, the greatest being pride and selfishness and the horrible fruit it has produced in our relationships, family, neighbors and communities. There are waaay too many tragic stories involving women and children today but for me, this is a great story about a real hero.  Growing up without a father but now being one, listening to this story, I recognized something was being deposited in me of real value.  We should all be so blessed to have moms and dads like that.  To be moms and dads like that.

Thank you for reading all the way here, happy Mother’s Day moms, you fill your children with memories and provide love and security like nothing else.  Blessings!

This is the Delma Ann, a crab boat in Florence, OR.  Al Pazar has been a crab fisherman on the Oregon Coast since disco was popular in 1975. He has operated the Delma Ann since big hair and acid wash jeans were popular in 1983.  The Delma Ann provides plenty of crab for the Krab Kettle, a restaurant and seafood shop he and his wife run  in Florence. How cool is that?  I provide lettuce for my wife’s salad from the garden box  I captain out back…

Just down from the Capitol building in Boise is this unique corner on Capitol & Idaho.  This corner used to be a Starbucks, then became a Tully’s Coffee, then became Caffe’ Capri Coffee and now is a Sushi joint.  I have a history of drawing cool local sites, only to see them go out of business or become something else more “hip”.  This is one of those.

I started drawing when I was about 5 when someone gave me a pencil and some paper to entertain myself. Before long, I was strung out on pens, blacking out teeth and drawing facial hair and eye-patches on models in magazines and catalogs. I hope you enjoy my drawings and doodles. Thanks for stopping by.